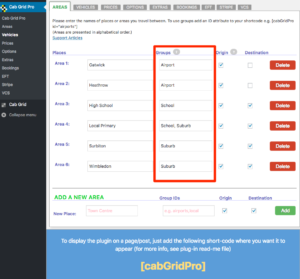 The CabGrid Pro taxi price calculator plugin for WordPress allows places (destination or origin location) to be assigned to one or more custom groups. Using the shortcode GROUPS attribute (or widget setting) multiple versions (or instances) of CabGrid can be loaded on a single web page to serve different purposes – for example, one for airport transfers, one for school pick-ups, etc.

In CabGrid Pro v4 and earlier, groups are assigned using the ‘id‘ shortcode attribute. v5 and above uses ‘groups‘.

Under the AREAS tab in the CabGrid Pro admin interface there is a column titled ‘GROUPS‘. Group names should be entered here.

Areas can be assigned to many groups at once. Each group name assigned to an area should be separated with a comma (eg: airport,schools,hotels,resorts). Do not use a space after the comma.

Group names should avoid ambiguous or repeating characters. For example a group named simply “1” could conflict with a group named “11” or “group1” due to the way groups are currently working.

It is also possible to combine groups in a single instance of the CabGrid Pro calculator. Continuing our example above, to also include places assigned to a group called “schools“, the following shortcode could be used:
[cabGridPro groups="airports,schools"]

Any groups created are also assigned to the CSS class attribute of the CabGrid Pro instance. This allows targeting of that particular group instance. Each group name is prefixed with ‘cabGridProGroup-‘.

So, for example, the airports group (or instance) can be styled individually using the class ‘.cabGridProGroup–airports‘
.cabGridProGroup-airports {background-color:green;} 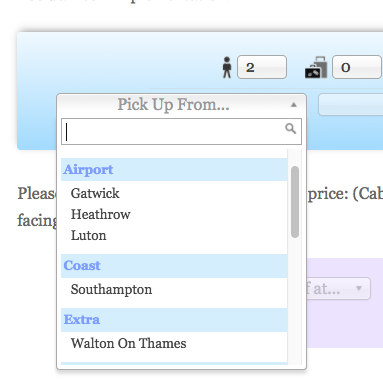 Under the CabGrid Pro OPTIONS tab, enabling the item labelled ‘Group Areas‘ will cause the pick up and drop off drop-down lists to group areas by the group names defined in the AREAS tab alphabetically.

To have groups ordered differently, prefix group names in the GROUPS column under the AREAS tab with a number. For example:
1.Schools,2.Ariports,3.Resorts,4.Hotels

From CabGrid Pro v5.8.6, use a carat (^) symbol to separate group sort order and label. Characters before the carat will be hidden. For example:
1^Schools,2^Ariports,3^Resorts,4^Hotels will be listed as Schools,Ariports,Resorts,Hotels.

CabGrid Pro updated to v5.8.21 with bug fixes and improvements. Available to all users via their WordPress Plugins page updates. See readme for change log: https://t.co/H2xYFc3CEH